Millions were affected by the tragic and unusual hurricane, affectionately known as Sandy, which stormed through the northeast this past week. In tragedies and natural disasters, communities – well, and the world – tend to come together to give each other a hand, whether it be giving money for relief or putting up phone charging stations. Sandy was no exception to this phenomenon. In today’s world, it’s easier than ever to help out with disasters like Sandy. Let’s check out some of the ways our good ol’ friend social media came to the rescue for the victims of this horrific storm.

NYC’S The East Village helped someone states away make sure that their friend was fine during the power outage, when it was hard to get in touch by cell phone. Luckily, TEV made sure she was safe and sound. Thanks for this one, Facebook!

This tweet by Invisible People ended up being seen all over the Twittersphere until someone found the sought-after generators. Ah, the magic of Twitter!

The FDNY became a major player in the Sandy relief mission. They’ve constantly been tweeting helpful links, as seen above, updates, and safety precautions. They also responded to individual questions and concerns during the storm. Their 55 thousand followers sure are thankful for their active social media presence!

NYC mayor Mike Bloomberg’s tweets didn’t only aid those who needed help in finding it, but also giving an opportunity to those who wanted to help restore their community.

Instagrammin’ the Storm Away

Instagram saw as many at 10 photos uploaded per second – whoa! – during Sandy. #Sandy, #HurricaneSandy, and #Frankenstorm were all trending before, during, and after the storm. Instagram helped people unaffected by the storm to see what the average affected person was dealing with, minus the photoshop. Many photos were uploaded of the damage in an attempt to save the affected areas by any means possible.

NJ’s Governor Christie was supportive in helping NJ citizens cope with Frankenstorm. He even offered to sign an Executive Order rescheduling Halloween if the storm ruined the holiday fun. Aw! 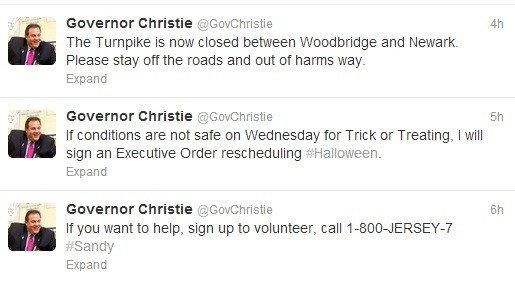 The MTA was noted as one of the most helpful sources before, during, and after Sandy. They have been tweeting about which trains are open, when they will be open, and also about other means of transportation, such as bus routes. They even ran free buses on election day so that New Yorkers all over would have the opportunity to vote in this difficult time. The MTA also answered the questions of anyone who needed to know about the different means of transportation available. The MTA was often the first source – even before major news outlets – that the people heard from during this difficult time.

News sources getting their news from social media!

The average northeast citizens weren’t the only ones getting the majority of their news from social media – the huuuge news outlets too! CNN, NYTimes, and many other outlets were seen retweeting the MTA, mayors, NYPD, FDNY, and more. On the TV and radio, the phrase “______ recently tweeted…” was used an incredible amount of times during Sandy.

Many people who didn’t grow up with social media often believe that it’s just a haven for those people from your high school class who post about their daily Starbucks experience. Frakenstorm proved otherwise. During this take of darkness in despair, it seems that Twitter and the rest of the social media gang helped out more than anticipated. Social media didn’t only help with monetary donations but kept the public dutifully informed of all things happening pre and post Sandy. And of course, it gave one city another chance at Halloween. It seems that our world has become better connected than ever with little more than a hashtag and some generous and incredible people.

All rights reserved The Spark Group.